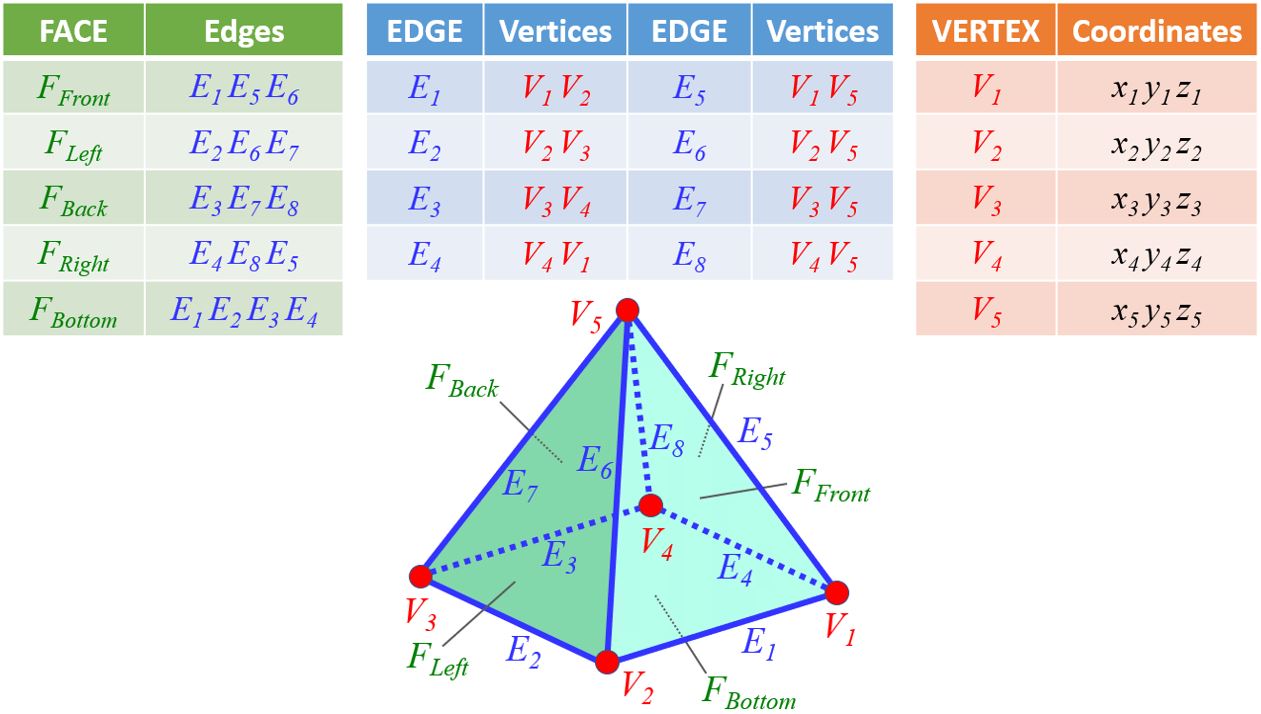 Boundary Representation (B-Rep) is one of the most widely used Solid Modeling methods in the CAD/CAM industry. It is based on the idea that any physical object can be considered to be bounded by a collection of faces, which are in turn used to represent the object. Take the pyramid object above as an example; the pyramid model itself is represented by the 5 bounding faces (green); each face is associated with several edges (blue), and each edge with two vertices (red). The Face-Edge-Vertex tables altogether form the B-Rep definition of this solid model. 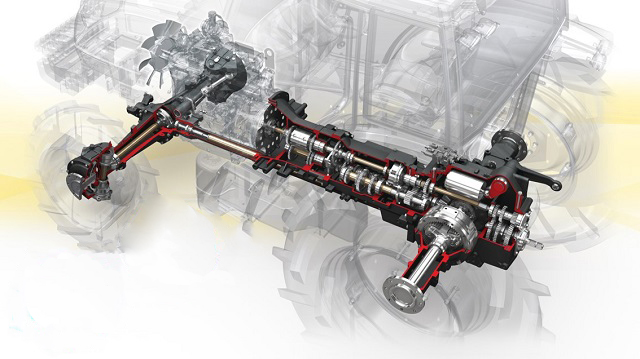 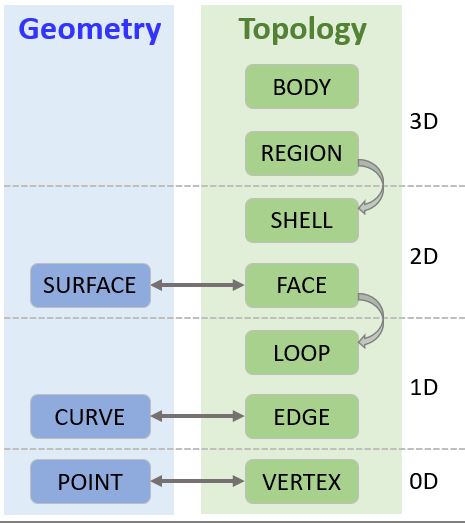 The B-Rep technology enables the CAD system to build just about anything that exists in the 3D world around us. The left figure above shows the chassis asssembly modeled by the world's leading geometric modeling kernel --- Parasolid, which in essence, is an exact B-Rep geometric modeler, built upon the system of geometric and topological entities shown on the right. 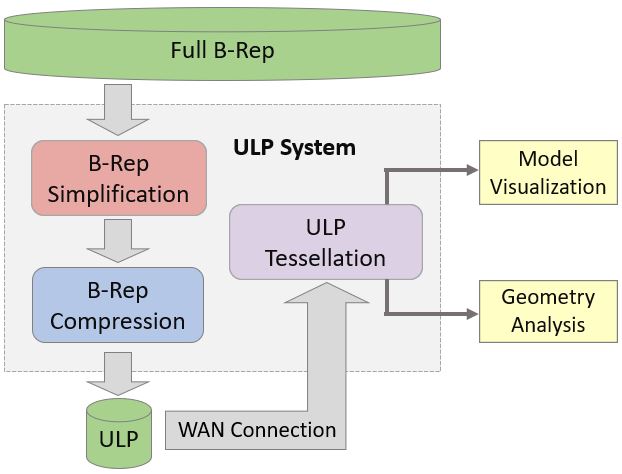 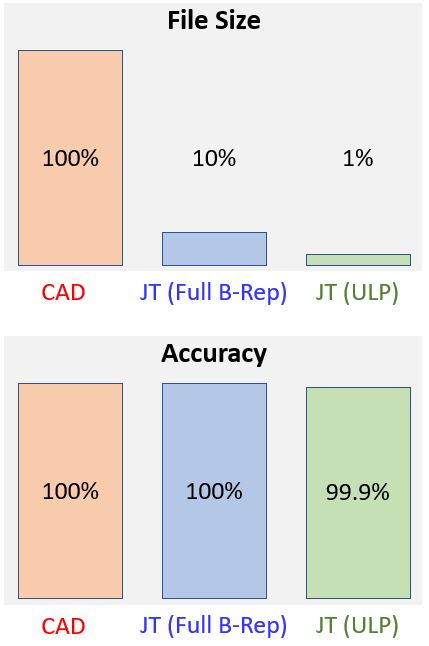 The full intricate B-Rep data structure tends to be fairly heavy for real world models, even in the JT format, which is known for its light-weight storage size. This is why the Ultra Lightweight Precise (ULP) B-Rep format was invented through a series of ULP technologies including B-Rep simplification, compression and tessellation. The ULP format takes only a tiny bit portion of the original file size while maintaining at least 99% of the geometric accuracy. This superior lightweightedness makes ULP ideal for efficient graphics loading and collaborative visualization over the network without compromising geometry precision requirements.

Convergent Modeling of B-Rep and Facet 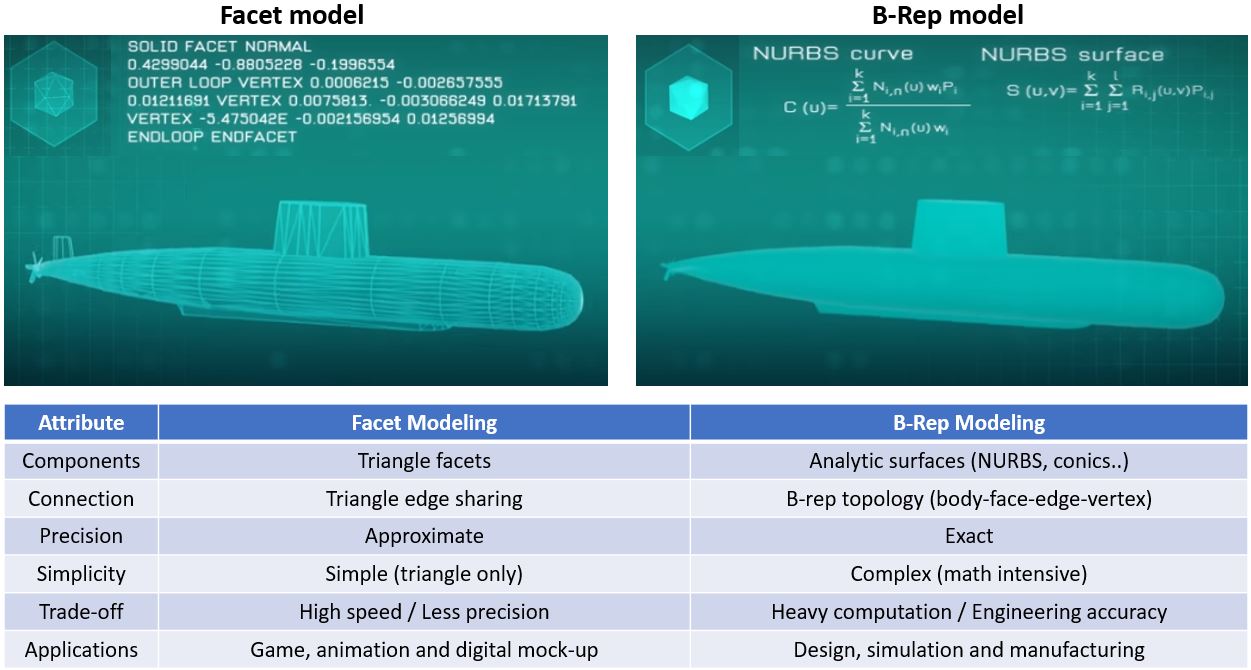 B-Rep models imply smooth and analytic geometries in the traditional sense, a.k.a classic B-Rep. A more common type is the Facet model, consisting of a large number of triangle facets. Both types of model representation have pros and cons listed above. Conversion between the two types of models are often required but are rather cumbersome.

Parasolid introduced the concept of Convergent Modeling to indicate its APIs could work directly with facet models as if they have been with the traditional classic models. The conversion back and forth, from the users' perspective, are circumvented, with the B-Rep and facet modeling converge. The above figure shows an example of the boolean operation of union operated on both facet and B-Rep inputs with the same interface thanks to this new way of modeling.